December 26, 2020 / Comments Off on Blockchain Technology and eDiscovery

As the digital era unfolds further, we’re likely to see many more beneficial and exciting advances in all areas of life. One such area is the eDiscovery landscape, in which emerging tech continues to play its role. Several change agents are expected to disrupt eDiscovery processes.

The latest litigation technologies include blockchain, a technology that originally came into play as a public ledger for cryptocurrency transactions but is capable of much more.

In this guide, we’ll discuss the impact of blockchain technology on eDiscovery. But before we go into that, it’s important to understand the key features of blockchain.

The most important feature of blockchain is that it’s an immutable technology. This means that a block that’s verified, timestamped/dated, and included in the existing chain can’t be altered. Since it’s permanently archived, any request to alter the data is then blocked by the nodes in the network.

Updates to the ledger are made in real-time and can be accessed from anywhere. Since the network and structure of blockchain are geographically decentralized, it promotes easy sharing and control of data on a global scale. For both local and global networks, this accessibility keeps on improving.

The second key feature of blockchain is that its structure is highly hack-resistant. Because of the dispersion of the network’s many servers, blockchain proves to be much more secure than a single server.

The Impact of Blockchain Technology on eDiscovery

Keeping the above characteristics in mind, blockchain technology is set to shape the EDRM process so that it’s more efficient, cost-effective, and secure than ever.

Blockchain’s consistent, self-enforced verification algorithms, when applied to transaction requests, can significantly eliminate the need for an intermediary audit. These algorithms can be programmed to uphold standards and maintain fairness, reducing the possibility of malfeasance or corruption. This should reduce the overall cost and time to complete a project as well as the risks involved.

Currently, monetary transactions for foreign matters need to pass through multiple banks before reaching their final destination. All these intermediaries are omitted with blockchain, which allows for quick verification of transactions sent from one node to another. Thus, the operational spend incurred on verifications by middlemen can be saved.

In addition, the timestamps of records stored in blockchain come with a unique identifier that can’t be changed in any case. This makes the records highly secure. The only people who can view the transactions are those possessing the access codes.

Moreover, records can be easily searched and updated with blockchain-based EDRM, allowing for higher efficiencies in searching and reviewing. The inherent transparency brought about by blockchain should also improve accountability and documentation.

To sum it up,  other emerging tech may not prove as useful, but the impact of blockchain on eDiscovery is expected to be huge. Blockchain’s unmatched capabilities will ensure efficiency, cost-savings, and security in an electronic discovery process. 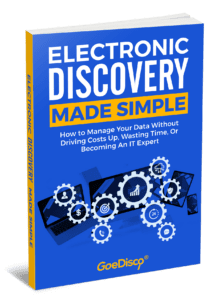 Get Your Free Copy now!